It’s a challenge to manage traffic flows at various transit stations or hubs. Long waiting lines and travel delays are a common annoyance at many bus terminals, bus stops, subway stops, train stations and airports. Of course, the opposite problem also exists; i.e., desolate transportation platforms that are unsafe because they are understaffed and underutilized. Both problems persist despite various efforts by transportation agencies.

What can be done to alleviate such problems, aside from adding more cashiers, security guards or transit vehicles? One solution is to optimize security, performance and operations with video content analytics (VCA) technology, which goes above and beyond video surveillance. Many transit counters and waiting areas already have multiple video security cameras that operate 24×7, but that technology is not sufficient. First of all, there are simply not enough security staff to monitor every camera, and even if there were enough human monitors, it’s highly unlikely that they could detect every security event, incident or trend in the overwhelming amounts of video. In contrast, VCA technology that is backed by Deep Learning and artificial intelligence (AI) does detect, extract, and classify all objects to create a structured information database out of the unstructured video data. In the transit industry, for example, agencies can use VCA technology to quantify and classify the number and type of vehicles and pedestrians in a terminal or station. The VCA engine can then present that structured data in dashboards that provide valuable insights to transportation agencies, driving increased security and enhanced operational productivity.

Mass transit planners can gather accurate data about transit systems, identify patterns and even correlate between video data and other digital data to optimize transit flows. Furthermore, in addition to analyzing video data about their own networks, public transport companies can often access vehicular and pedestrian traffic data that city officials gather and share with other agencies. To improve their services transit companies can cross-reference that data with scheduling and delay data to plan routes and timing based on typical traffic models and prepare contingencies for unexpected traffic jams and delays. 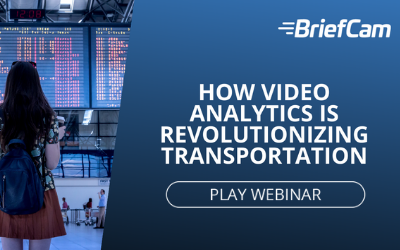 Video content analytics aggregates video data over time, and presents that data in dashboards and heatmaps so transportation managers can understand how vehicular or pedestrian traffic flows in a terminal, see where congestion occurs, and make informed decisions about how to alleviate it. Knowing which entrances and exits are underutilized, as well as the hours and locations of increased crowding and dwell time, can help transit managers ensure that adequate staff is onsite to meet the needs of travelers. Managers can react in real-time by configuring alerts that trigger a call-to-action when crowds start forming or a disturbance happens – enabling them to redirect traffic when bottlenecks occur.

When video data is aggregated over time, it can be visualized as traffic heat maps and dashboards, helping transit managers identify patterns and problem hotspots in order to determine how to proactively deploy staff or direct traffic to alleviate expected and unexpected congestion (especially when they’ve discovered that there are underutilized areas of the terminal!).

When most people consider the uses of video surveillance at an airport, train station or bus terminal, their immediate assumption is that it’s used for promoting public safety. But, beyond security, video resources can be leveraged to optimize business performance and operational efficiency throughout a transit depot or system. For example, transport hubs can plan the placement of food and retail vendors intelligently, and use pedestrian traffic data when renting store space to demonstrate the property value.

When correlated with third party data resources, video data can help executives understand performance and drive informed, intelligence-based business decisions. For instance, the business might evaluate where shoppers dwelled in-store and correlate this information with Point of Sale (POS) system data to determine whether a specific promotion was effective in driving conversions. The retailer could assess whether visitors were dwelling, but not buying and determine the causes for this. They could also discover that very little traffic navigated to this area and move the advertisement or product display based on popular path heatmaps generated by video content analysis software.

Beyond day-to-day management, VCA can also help with planning for future construction in a transit terminal; with data visualizations of vehicular and pedestrian traffic powered by VCA, construction projects can be planned based on actionable and quantifiable business intelligence about how the space is navigated as well as misused, underutilized or ineffectively appropriated.

Bus and train stops, transit hubs and airports are not infrequently targeted for terror attacks and criminal activity. Even though video content analysis enhances the value of video surveillance beyond traditional security, it is also a critical public safety enabler throughout the transport system. Transit managers and security personnel must have real-time situational awareness, offering the agility to respond instantly to suspicious behavior and individuals and proactively prevent incidents. With video analytics software, operators can to set up real-time alerts based on object extraction and—where permitted—face recognition, to be alerted when unusual behavior occurs. This might include such as loitering in restricted areas or crowding (which could lead to violent outbursts). By triggering a call to action, officers could be deployed to monitor a situation more closely and, if need be, proactively stop an unauthorized activity.

By enabling officers to be more responsive and proactive as situations develop, such alerts prevent security breaches and catastrophes. Of course, in addition to immediate video review and response, transit agencies can also extend the utility of video footage for post-event investigation by searching and filtering footage in the aftermath of an event. The ability to identify, search and filter video objects and events of interest with speed and precision, is critical for transit security for responding to security incidents and emergencies that occur. Long term, security can leverage video content analytics software to recognize patterns and configure alerts to detect anomalies or suspicious behaviors, helping law enforcement and security teams maintain a safe environment for travelers.

For transit organizations of all types and sizes video intelligence solutions make video searchable, actionable and quantifiable, unlocking the power of existing video surveillance resources. It optimizes operations and improves security by enabling transit organizations to closely monitor spaces and gain real-time information, as well as review aggregated data to draw actionable intelligence and resolve diverse and dynamic challenges that arise. The end result is transit systems that are safer, more efficient and economically proficient.